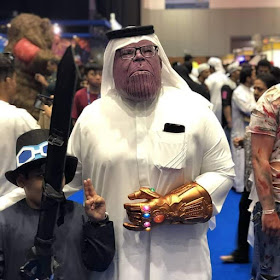 Yup! Everyone died! Sadly everyone died of excitement as they queued for the much-awaited concluding part of the Avengers story. There were even reports of people coming early at movie tgeters and literally running towards the ticketing to be the first in line to watch the Avengers Endgame.

All-powerful Thanos is the one to defeat, and who among our heroes could manage to bring him one despite wearing the Infinity Gauntlet that with all the stones complete has made him invincible.

Who could have thought of a more epic ending or conclusion to the story that even spanned across several movies of different superheroes, not just starred by Earth's mightiest heroes.

Filipinos do love their superheroes, may it be one, a few, or all of the Avengers team lineup. One thing is sure, majority all wanted to know the ending to a devastating cliffhanger from the last movie when half of the Earth's population got dusted from the "snappening" of evil tyrant Thanos, the villain who was actually presented as seriously concerned of the planet's  current situation.

But everyone is also asking who needs a leader who is willing to sacrifice the lives of people just to cleanse the planet. We all want to live in bounty, but the thought of losing lives in a cleansing process seems unbearable.

If you came here for some spoilers, well you came to the wrong place as we never want to ruin the suspense for you. Experiencing for yourself is what you've paid for so unless you've seen the movie without knowing the nitty-gritty details, then you were cheated of your hard-earned movie theater payment.

People are even threatenong others not to spoil via social.media otherwise they will not think twice in unfriending you. Lol! Sacrificing friendship in exchange of a virginal experience of watching how the story ends.

What we could give you:

There will be no post-credits scene in Endgame....No more need since it is supposed to be the final part of the long-running story. But I think you are the type of person who trust no one! You might be staying till the last credit roles.

Yes you'll stay through it. Yes you're dumb, but it's tradition damn it! Not even I can stop you from making a fool of yourself. But trust that you will indeed stay gasping "Was that it? It was a win for our team but it was also the saddest I've seen.

Watching Avengers: Endgame was simply the most incredible experience. Reminisced watching Iron Man back in 2008 and falling in love with the MCU. I never knew it would become my life. I already wish I could re-live the earlier days.

The movie, as expected, is incredible. It’s just an absolute treat for Marvel fans in every way and it’s the most emotional MCU movie by far. It’s also probably the best. Stay away from spoilers at all costs!
Wazzup Pilipinas sa Wednesday, April 24, 2019
Share