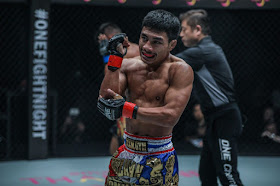 Unlike the other Thai combatants on the burgeoning world-class roster of ONE Championship, Kritsada “Dream Man” Kongsrichai was cut from a different cloth.
While the rest came from striking backgrounds, most prominently Muay Thai, the 26-year-old native of Nakhon Si Thammarat, Thailand has an extensive background as a wrestler.
Kongsrichai is a 13-time Thai wrestling champion who proudly owns an impressive 180-20 record in competition.
“I started out as a wrestler. Unlike some of the other Thai fighters in the sport or in this organization, I didn’t come from a Muay Thai background. It’s quite unusual, but as years passed by, I learned how to embrace it. I realized there are instances that it’s good to be different,” he explained.
Now as a professional mixed martial artist, his approach on his quest of reaching the sport’s summit will not be different as he always finds positives in any situation.
As a dedicated competitor with tons of confidence and humility, Kongsrichai always looks forward on improving and reinventing himself in the constantly-evolving sport of mixed martial arts.
Kongsrichai’s pursuit to prove that he belongs to the ONE Championship cage continues on 24 March in front of his countrymen as he squares off with a young and tough Filipino foe like Robin “The Ilonggo” Catalan.
Both men are slated to lock horns on the undercard of ONE: IRON WILL, which takes place at the 12,000-seater Impact Arena in Bangkok, Thailand.
Carrying a professional win-loss standing of 6-3 into his three-round strawweight encounter with Catalan, Kongsrichai stills sees a lot of work that needs to be done after winning two of his assignments in 2017.
Following his submission loss to former world title contender Joshua Pacio in August 2016, Kongsrichai redeemed himself by defeating Indonesian dynamo Adrian Matheis via rear-naked choke in the first round a year ago.
Nine months later, Kongsrichai made quick work of Robin’s brother Rabin Catalan by way of first-round technical knockout.
Although he aced his last two outings under the ONE Championship banner, Kongsrichai refuses to be complacent as he takes every match in his budding career as a lesson that will strengthen him as a martial artist.
"I'm a very positive person. I take each win and loss as a lesson to learn and to develop. We always go back to the drawing board to review and maximize everything that we can get from my previous fights. The best part of it is that I'm improving everyday," Kongsrichai said. “I’m looking forward to have a successful 2018.”
Under the tutelage of coaches Tommy Hayden and Ponlawat Maki along with the whole Thailand-headquartered Team Hunter crew, Kongsrichai is in deep training on upgrading his arsenal for his upcoming meeting with Catalan.
Kongsrichai did not mince words about his excitement on showcasing the reinvented version of himself on 24 March.
"They'll be seeing a different fighting beast on March 24th. I'm very excited on showing the upgraded Kritsada. My team will do everything to help me reach my martial arts dreams," Kongsrichai stated.
With the aim to be a more versatile competitor inside the cage, Kongsrichai revealed that he and his team are very focused on honing his stand-up game to complement his grappling pedigree.
“I want to be a complete martial arts package. I've been fighting and training since seven years old. To reach my goals and fulfill my dreams in life, you need to sacrifice and learn everything to succeed," he revealed. "I'm sharpening everything. I'm putting my Muay Thai and wrestling skills to the next level."
Kongsrichai is fully satisfied with the turnout of his training camp for his return to the ONE Championship cage as he expects a win-hungry opponent in Catalan at ONE: IRON WILL.
Catalan is aiming to place himself back on the winning track after falling short against Dejdamrong Sor Amnuaysirichoke last December.
“He is a tough and hungry warrior. I know that he also wants to achieve his dreams in this sport, but on March 24, I will be the one to walk out as the winner. This will be a war, and I hope I can win this fight in front of my countrymen with another finish,” Kritsada cautioned.
Kongsrichai believes that a convincing win over Catalan will elevate him into the upper echelon of ONE Championship’s strawweight division.
"I have been dreaming of becoming a world champion since I was a kid, which was also the reason I got my moniker ‘Dream Man.’ Someday, I will be a champion. But my full focus is on my next opponent right now. A win in this fight will definitely improve my position in the division," he ended.
​For more updates on ONE Championship, please visit www.onefc.com, follow us on Twitter and Instagram @ONEChampionship, and like us on Facebook at https://www.facebook.com/ONEChampionship.​
Wazzup Pilipinas sa Saturday, March 17, 2018
Share