Manuel is Waiting for You! Wait,.... Who's Manuel Again? 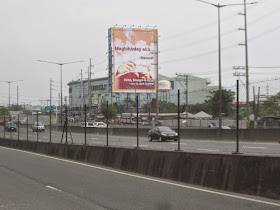 Many are talking about these mysterious billboards that suddenly appeared in different parts of Metro Manila and supposed to have been posted by a certain Manuel who says "Maghihintay ako" roughly translated as "I will be waiting."

Who is this Manuel and who or what is he waiting for?

There's also an indicated place namely EDSA Shangri-La hotel and a certain date and time in the evening of May 22.

Now what could be happening on the said date at the mentioned hotel? It must be special since the Shangri-La hotels are first class hotels that cater to the affluent. You have to spend quite a lot to organized a meeting at that hotel, or is it probably a big event of one of the top companies in the Philippines, or maybe by some foreigner who's meeting her lady in the country.

I'm intrigued and would like to call up the hotel for some hint but I guess the hotel will not allow me to discover what will really happen on the said date.

If we look closer at the billboard, there's an image of a person writing something on a journal. So is it a long distance love affair as what I've read from some blogs that already posted these similar questions ahead of me or have they guessed wrong.

Based from my research, there are billboards along NLEX, SLEX, Morayta, Recto, and only God knows where else... but if you happen to see one from other areas please do let me know, OK?

Who knows what will really transpire on May 22 but I have a sure hunch it will be an eye-opener.

I'm excited for the revelation at EDSA Shangri-La hotel so I would never miss this date to find out who the hell is this Manuel!

This actually reminded me of the Safety Not Guaranteed movie I watched several years ago where a man posted an ad in the newspaper looking for a companion to go with him back in time.

The ad read "WANTED: Someone to go back in time with me. This is not a joke. You'll get paid when we get back. Must bring your own weapons. Safety not guaranteed. I have only done this once before."
Yeah, it was even crazier. But a small ad in the newspaper is not as expensive as so many billboards across Metro Manila...but I should not be limiting myself in Manila for there also might be similar billboards in the provinces or other regions in the country.

Wait for me too Manuel for I will be there on May 22 as well at EDSA Shangri-La hotel to spy on this mysterious meet-up. An exclusive coverage would be nice but I'm guessing others would be there as well to witness such a peculiar occasion.
Wazzup Pilipinas sa Friday, May 08, 2015
Share