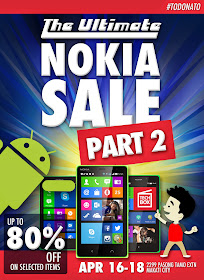 About a month ago, Techbox Philippines offered a Nokia Sale where up to 80% discounts were offered to the public. Smartphones ranging from entry level to the sophisticated Lumias and Android handsets from Nokia were made available at an incredible low price, much to the public’s delight. Over 3000 Nokia handsets were sold on the last Nokia Sale, with thousands of people lining up to get their hands on the offerings.

“We thought it was the last hurrah – the final chance for Nokia enthusiasts to get smartphones with the Nokia brand on them, before Microsoft floods the market with their own handsets” said Angela Gutierrez, Business Unit Head for Techbox Philippines. “But after the sale, we were totally blown away by the compelling number of people who said they wished they didn’t miss their chance to get their Nokia phones. There were also a lot who knew of others who also wanted Nokias but for some reason weren’t able to come to our sale on those dates. The requests were just overwhelming,” added Angela.

Choosing to act on the demands of the public, Techbox Philippines found a way to give customers what they want. The second part of the clearance sale offers discounts up to 80%, amazing bundles, and a ‘Buy 1, Take 1’ promo on select handsets.

Techbox Philippines is the fastest growing gadget retail chain in the country. They offer trusted handset brands and cellphone accessories at an affordable price.