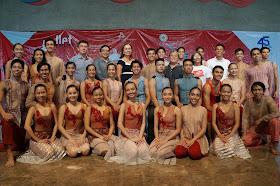 To kick off Ballet Philippines' 45th Anniversary – The Sapphire Season, the sublime paralytic Apolinario Mabini and the story of his role in the Philippine Revolution are brought into the limelight once again, just in time for the hero’s sesquicentennial birth anniversary.

La Revolucion Filipina is scheduled from July 25 to 27, 2014 at the Tanghalang Nicanor Abelardo (CCP Main Theater) and is the fourth restaging of the modern dance masterpiece led by three members of La Revolucion Filipina’s original cast, Annette Cruz-Mariano, Judell de Guzman-Sicam, and Alden Lugnasin.The show is at 3pm and 8 pm (Friday and Saturday) and 2pm and 6pm (Sunday).

At a media launch held at the CCP itself last Friday July 11, 2014, members of the media were treated to an excerpt of the show performed flawlessly by the cast themselves, and then followed by a press conference participated by the management of Ballet Philippines and the La Revolucion Filipina cast themselves. Present to answer our inquiries were choreographer Agnes Locsin, Ballet Philippines President Margie Moran, set designer Mio Infante, librettist Dennis Marasigan, Ballet Philippines Artistic Director Paul Morales and some of the lead cast of La Revolucion Filipina.


It was my first time to see a live performance of ballet artists and I did notice that most of the casts are young and fit in figure which is most probably the ideal state a cast member should be in if they want to effectively express their emotions and messages thru body actions. The body movements are basically the primary means of relaying the messages to the audience.

However, with La Revolucion Filipina, the performance also incorporates dialogues into the story. Thus, unlike other performances that relies solely on the graceful body movements, they have an advantage of better expressing the story....or not? Agnes Locsin said it was actually a challenge since people may get confused on where to focus - the action or the words.

With so many competing, and distracting, sources of entertainment, one will be surprised to see enthusiasts of the arts to still be there to support our local productions. Foreign acts have the edge on creating fabulous production numbers as compared to our local scene, but we should bear in mind that if we will patronize our own it will eventually benefit us in the long run. We really need to support our own Filipino identity so as to encourage more people to sponsor and participate.

I'm actually excited to watch the show on its first run, and hopefully bring along families or friends if possible. The dancers were really a spectacular sight to see. I may seem a bit lost on who to focus on since I was taking a video of the sample performance and don't really know where to point my camera, but now that I know the main cast, have an idea of the story, and would be watching it in a bigger and wider stage, I would be able to effectively see everything that's happening.

Preparations for the production began at the start of summer, with eleven of the company’s dancers being sent to Davao for a six-week residency at the Locsin Dance Workshop. The dancers underwent intensive training in Agnes Locsin’s signature Neo-Ethnic dance style on top of taking regular classical ballet classes. They also participated in the 32nd Locsin Dance Summer Showcase on May 14 alongside the Dance Workshop's regular students.

Guest artist Sonny Locsin and BP principal dancer Jean Marc Cordero play the role of Apolinario Mabini. Locsin was an alternate for Mabini in 1998, while Cordero danced the role in the 2008 restaging. They share the stage with BP principal dancer Richardson Yadao and Tanghalang Pilipino actor Nicolo Magno, the new production’s Emilio Aguinaldos. 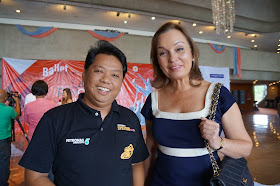 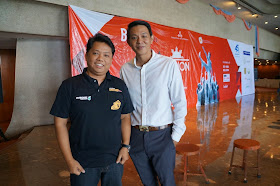 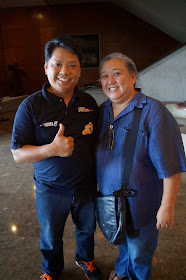