Market Tour of Manila: Discovering the Best Buys and Bargains Plus a Lot More (Part 2 of 2) 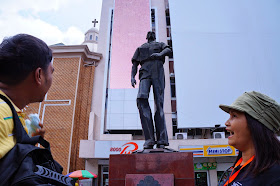 To continue with our Market tour of Manila organized by Smokey Tours, your pambansang blog once again brings you more stories about our recent adventure along old downtown Manila. Last time we explored the many vendors selling different wares around Quiapo, the Muslim community, some of their prime products, and their majestic Golden Mosque, and also a glimpse of the Bahay Nakpil. Now, we bring you this time to more iconic places that are also very popular sights in Manila.

The commemorative monument located at Plaza Lacson was our next stop. The plaza, originally named Plaza de Goiti after Spanish conquistador Martin de Goiti who led the conquest of the kingdoms of pre-colonial Manila, is a tribute to the "self-styled Don Quixote" and arguably the greatest mayor of the City of Manila, Arsenio H. Lacson. The monument was made by renowned sculptor Eduardo Castrillo. Manila has erected other monuments of their former mayor in other parts of Manila like the Freedom Triangle plaza grounds near Manila city hall and along Roxas Boulevard. Both were sculpted by Julie Lluch, along with other heroes like Andres Bonifacio and Emilio Jacinto.

Lacson, who earned the moniker “Arsenic” for also being a hard-hitting radio commentator, was elected mayor of Manila in 1951 and was considered by many to be the finest mayor the city ever had. The man died of a heart attack while in office in 1962 at the age of 49.


Nympha of Smokey Tours talks about the Arsenio Lacson monument while we try to listen and ask questions. "Try" is the operative word...hehehe. I wanted to sound like a foreigner but I failed miserably.

The European-style Carriedo water fountain was built in honor of General Francisco Carriedo who was considered as Manila's greatest benefactor. He was responsible for bequeathing money for the construction of a water system in Manila for the benefit of the poor. It took many years before his vision was realized and thanks to the efforts of Franciscan friar Father Felix de Huerta, Manila's first water system was inaugurated in 1882.

There are actually other fountains in Manila that look like these but I never really had the opportunity to come closer and examine the details. This one just a few meters away from the Lacson monument would have been ideal if it was in a park where there are trees to shade spectators. It was so hot that afternoon that we couldn't really stay long in that area to appreciate it longer.


The Arch of Goodwill, serving as entrance to Binondo's  Ongpin Street, symbolizes centuries of friendship between Filipinos and Chinese. Ongpin street was formerly called Calle Sacrista and was renamed to honor nationalist merchant Roman Ongpin who supported the Filipino freedom fighters during the revolution against Spain and also during the Philippine-American war. There is also a statue of Roman Ongpin standing near the Binondo Church.

It was only around 10:30 am but the long walk must have made me hungry already. Though I had bottled water with me to quench my thirst, I really am not fond of bringing packed food with me. I prefer my food hot and fresh from the kitchen.

We passed by a store that sells siopao that was highly recommended by our tour guide so I made sure to try it myself.

Siopao is steamed pork buns with either "asado" or "bola-bola" as fillings. But there's also "special" version where many other ingredients like salted eggs can be added. There are others who also invented the fried siopao for variety, but I prefer the steamed one to stay away form oily foods.

These were being sold by Chinese here who are regarded in the Philippines as the best businessmen ever. Many of the popular and huge companies are owned and run by individuals of Chinese origin.

Binondo is the oldest Chinatown in the world populated by ethnic Chinese living in the Philippines. It is the center of the vibrant Chinese community. It is one of the great cultural troves of the country best explored when riding a calesa. But since the Chinese people are the most successful in terms of setting up a business and making it into an empire, they are practically everywhere already with properties so many that they seem to own a huge chunk of the Philippines.

We've heard of the term "Tsinoy" which describes the merging of Chinese and Filipino (Pinoy) identities since they've been here for the longest time, born and raised their children, and their grandchildren, and so on, of many generations.

I admire them the most when it comes to business or entrepreneurship. They will sell anything and everything that would gain even a measly profit, but in the long run, their perseverance had bountiful rewards.

We Filipinos usually are more attracted to the get-rich schemes, or are hesitant to run a business if its not as fancy as their friends or neighbors. We would always want to start big and forget the fact that all the big and most successful business ventures mostly started out small. There are exceptions if you have rich parents to finance your start-up, but what they don't get is the patience and perseverance that we experience starting fro the grassroots level.

I believe the Chinese are also more religious, and superstitious. They follow a lot of traditional ways and methods that most modern men of this generation will consider baseless and obsolete. Even Filipinos are following Chinese customs and are even celebrating their festivities.


Nympha also brought us to a location, of whic the name I can't recall right now, that seems to be like another marketplace. It's a long stretch of roofed street where people sell all kinds of wares, mostly fresh vegetables, poultry and seafood, including groceries, and everything else you can find in a "talipapa"-like environment.

The transparent bluish-green roof makes almost everything underneath bluish and greenish in color.

We then exited to the area where we could see another famous Binondo church that was recently repainted/renovated. I went closer up-front to get a better photo. Apparently, it was still not finish as you can see from the right side tower that still has some construction ongoing.

As mentioned earlier, you can also see a statue of the late Chinese businessman Roman Ongpin here. The man was an intrepid supporter of the Philippine revolution of 1898 who generously provided money and food to the Katipuneros. He was a philanthropist, a civic leader and a patron of the arts.

There was also a statue of St. Lorenzo Ruiz, the Philippines very first saint, at the plaza just almost opposite the church. Since the Binondo Church is also known as the Minor Basilica of St. Lorenzo Ruiz and Our Lady of the Most Holy Rosary Parish. The plaza is called Plaza Calderón de La Barca. More information can be found here.


Lorenzo Ruiz is the first Filipino martyred for the Christian Faith. He was beatified by Pope John Paul II in Manila and later canonized on October 28,1987. He holds the distinction of being the first person beatified outside the Vatican. Lorenzo was born in Binondo, Manila on November 28, 1594 and was among the many Filipinos in whose veins run the mixture of two oriental blood: Filipino from his mother and Chinese from his father.

It was a hot summer afternoon so every step we took made us sweat a lot more than the usual. I was always yearning for something cold to quench my thirst but would also prefer something more filling than just juices.

Luckily, we passed by some people carrying "halo-halo" and so we asked them where they bought it. They pointed us to the direction where we are headed to so we continued with our walk and met this guy selling halo-halo with non-traditional ingredients.

The guy had sweetened banana (saba), melon strips, mango slices, and avocado scoops as his ingredients for his halo-halo. You don't normally see only fruit ingredients in a typical halo-halo in the Philippines. The only familiar one was the sweetened banana, and the rest was new for me.

The guy said you actually have a choice of ingredients.If you prefer only avocado, then he will just put avocado, top it with plenty of ice shavings, and then pour in a generous amount of milk and sugar. He also said it only takes him a few hours to sell several bottles of these since many people are really looking for refreshing yet affordable snacks to cool them down from this terrible heat we are experiencing. Since this is a seasonal sideline, you will find him selling other stuff during the rainy season.


We passed by the iconic Filipino-Chinese Friendship Arch that solidifies the special relationship between Filipinos and Chinese, and serves a bold reminder of the history between the two nationalities. The structure is a lasting testament to the unbreakable fellowship and bond.

But we all heard about the recent rift between China and the Philippines because of an island that both countries are claiming to belong under their jurisdiction. These territorial disputes have been causing a few concerns that somehow stains the friendship.

There are actually other similar arches located in other parts of the country like the one at Plazoleta Gayon Iloilo.
The influx of the Chinese into the Filipino community continues up to this day, and some would even say they've outdone us in many fields aside from business. Their influence dates back to the 3rd Century, when the Chinese were believed to come across Southeast Asia for trade. These Chinese merchants were said to have settled in Manila by the 16th century and was expedited when a section in Intramuros called the Parian was allocated for the Chinese population.

The tour of downtown Manila will not be complete if you won't pass by Escolta. It is the street that was considered before as the shopping hotspot of Manila where many luxurious brands once showcased their products in the now centuries-old heritage buildings.

Escolta remains to be a busy commercial street, but is now mostly occupied by banks and service shops and no longer for shopping.

We end the tour at a point where we can see from afar the Sta. Cruz church, another popular church named after the Holy Cross. It was erected in 1608 by the Society of Jesus, better known as Jesuits. It actually very near the Carriedo water fountain and Plaza lacson where the Arsenio Lacson monument is located.

This means we went around and got back to where we almost started. A few more steps and we are back to the Carriedo LRT Station on our way back home, now well-informed of a few of Manila's heritage locations, and bringing with us memories of our Market Tour.

Thank you Smokey Tours for giving us another wonderful and educational tour of Manila. We hope you can come up with more tours that will truly enrich the people who will join them.
Wazzup Pilipinas sa Wednesday, June 04, 2014
Share