Colorum Buses to Be Slapped with P 1M Fine 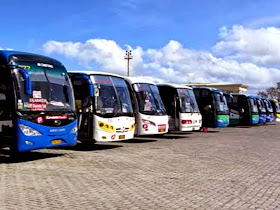 In line with their aggressive push to rid the streets of ‘colorum’ or unauthorized public utility vehicle (PUV) operations, the Department of Transportation and Communications (DOTC), the Land Transportation Franchising and Regulatory Board (LTFRB), and the Land Transportation Office (LTO) are issuing Joint Administrative Order (JAO) No. 2014-01 or the revised schedule of fines and penalties for violation of laws, rules, and regulations governing land transportation tomorrow, 4 June 2014. It will take effect on June 19, or 15 days after tomorrow’s publication in 2 newspapers of general circulation.

“Safety is always our priority. Recent accidents have highlighted the need for harsher penalties to deter illegal PUV practices and to better protect the public. The most significant change we are imposing is the P 1 Million fine on colorum bus operators for the first offense, to show that we really mean business in putting an end to their inimical activities which put people’s lives at risk,” said DOTC Secretary Jun Abaya.

In case of a second offense, the entire fleet or all CPCs of the erring operator will be revoked, the vehicles will be blacklisted from being used as PUVs in the future, and their vehicle registrations will also be revoked. The violating operator – and in case of corporations, the stockholders and directors – will be disqualified from operating any kind of public land transportation.

The JAO covers other PUV-related violations as well, such as the refusal to render services to the public or to convey passengers to their destination; overcharging; employing reckless, insolent, discourteous, or arrogant drivers; operating PUVs with defective parts and accessories; using tampered taximeters; trip cutting; and others.

Abaya also clarified that “the order covers not only franchise violations, but all breaches of road transport rules and regulations, such as the failure to attach license plates and driving without a valid license,” Abaya added.

Penalties for other violations, such as driving without a valid driver’s license; reckless driving; failure to wear a seatbelt; driving an unregistered motor vehicle; and other breaches of traffic rules and regulations, are also provided for in the JAO.
Wazzup Pilipinas sa Tuesday, June 03, 2014
Share