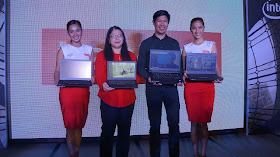 Known for its durability, robustness, design, and overall performance when it comes to the office, the ThinkPad is Lenovo’s brand made for those looking for a dedicated and reliable workstation. Placing power and performance as the main priority, the ThinkPad is designed to keep in pace with your business, whether at home, in the office, or on the move.

Lenovo Philippines Country General Manager Michael Ngan expressed that the new ThinkPad devices are geared for the working class of today who are always on the go. Anna Abola

“Our work methods are faster than ever. Workplaces are being reconfigured to encourage greater collaboration as more and more employees become mobile,” said Ngan. “To strive in this ever-growing digitized world, we need to be both flexible and agile. The new ThinkPads were developed with that in mind.”

A total of four ThinkPad products were revealed at the launch. These are the ThinkPad E470, ThinkPad T470, ThinkPad X270, and ThinkStation P410. Also revealed at the launch were Lenovo V310 and Lenovo Miix 510. Throughout the development process, Lenovo focused on a customer-centric approach to build on a heritage of product excellence while addressing the changing demands of the market.


Some of the new features added to the latest lineup include a cleaner, premium TouchPad that supports Microsoft Precision TouchPad for a more consistent trackpad user experience while new security features include support for Windows Hello for facial recognition login and a biometric fingerprinting sensor.

All new ThinkPad models with Windows 10 will come preloaded with an optimized Microsoft Signature Image to ensure a clean and fast system, right out of the box.

With regards to color design, the four ThinkPads and the Lenovo V310 will come out in Classic Black while the Miix 510 will be sold in a sleek silver color. Another visible change is the inclusion of USB Thunderbolt 3 support with a protection circuit chip attached to address incorrect power levels in the ThinkPad devices.

The ThinkPad’s legendary durability remains as every device went through rigorous testing for the Mil-SPEC 810G military standard, consisting of 10 durability tests which include humidity, low temperature, high vibration, and high altitude. 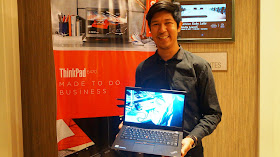 “We always strive to produce products that are innovative, game-changing, and that are always improving. It is this customer-centric purpose that we think has made the ThinkPad successful,” said Ngan. “And what better way to create the ultimate workstation than by working together with the world’s largest chip maker in Intel. Thanks to them, the already-powerful ThinkPad has two times the performance.”