Prevent Harry Roque to be part of ILC, Sign the #COCBlockHarryRoque petition 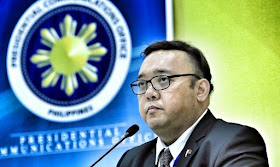 Bloggers, influencers, artists and content creators led by Concerned Online Citizens  tonight joined the opposition Harry Roque's nomination to the ILC. They emailed nearly 200 member-states of the UN to oppose the nomination of Harry Roque to the International Law Commission. 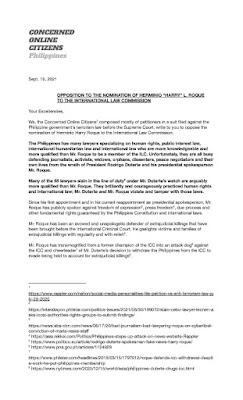 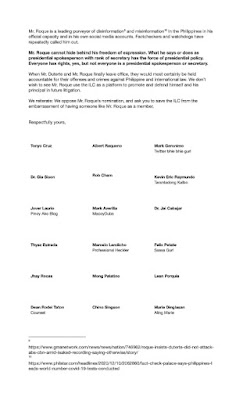 Please prevent a Philippine government official who is a Duterte apologist from continuing to be a fake human rights lawyer.

Let us not allow a big-time human rights violator to be a part of Internal Law Commission.

No to Harry Roque's appointment to ILC. He is the ruthless and more obnoxious goebbels of the Philippines. Duterte is the second coming of Marcos and Hitler combined.

"We, the Concerned Online Citizens composed mostly of petitioners in a suit filed against the Philippine government’s terrorism law before the Supreme Court, write to you to oppose the nomination of Herminio Harry Roque to the International Law Commission.

The Philippines has many lawyers specializing on human rights, public interest law, international humanitarian law and international law who are more knowledgeable and more qualified than Mr. Roque to be a member of the ILC. Unfortunately, they are all busy defending journalists, activists, widows, orphans, dissenters, peace negotiators and their own lives from the wrath of President Rodrigo Duterte and his presidential spokesperson Mr. Roque.

Many of the 65 lawyers slain in the line of duty under Mr. Duterte’s watch are arguably more qualified than Mr. Roque. They brilliantly and courageously practiced human rights and international law; Mr. Duterte and Mr. Roque violate and tamper with those laws.

Since his first appointment and in his current reappointment as presidential spokesperson, Mr. Roque has publicly spoken against freedom of expression, press freedom, due process and other fundamental rights guaranteed by the Philippine Constitution and international laws.

Mr. Roque has transmogrified from a former champion of the ICC into an attack dog against the ICC and cheerleader of Mr. Duterte’s decision to withdraw the Philippines from the ICC to evade being held to account for extrajudicial killings.

Mr. Roque is a leading purveyor of disinformation and misinformation in the Philippines in his official capacity and in his own social media accounts. Factcheckers and watchdogs have repeatedly called him out.

When Mr. Duterte and Mr. Roque finally leave office, they would most certainly be held accountable for their offenses and crimes against Philippine and international law. We don’t wish to see Mr. Roque use the ILC as a platform to promote and defend himself and his principal in future litigation.

We reiterate: We oppose Mr. Roque’s nomination, and ask you to save the ILC from the embarrassment of having someone like Mr. Roque as a member."