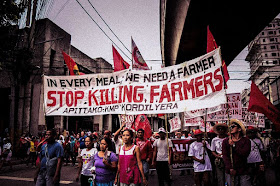 Wazzup Pilipinas!
Just finished watching A Taxi Driver last night and its unflinching depiction of the horrors of the 1980 Gwangju massacre in Korea reminds me so much of the footages from the 1987 Mendiola massacre as military forces similarly opened fire and gunned down defenseless protesters.

Korea, then, had just been placed under martial law by the United States-backed fascist military dictator Chun Doo-hwan, and military troops opened fire on protesters in Gwangju—with the go signal of the United States—because the protests were supposedly instigated by communists. 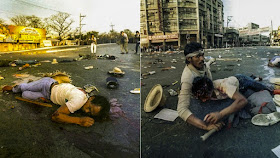 Meanwhile, the massacre of protesting farmers in Mendiola came less than a year after the fall of the fascist dictatorship of Ferdinand Marcos and “restoration” of “democracy” under Cory Aquino. The military’s reason for the violence? The protest was “infiltrated” by communists.

The thread that runs through the fascist dictatorships of Ferdinand Marcos and Chun Doo-hwan as well as the massacre in Mendiola in a newly-restored “democracy?” Rabid anti-communist hysteria—and it has been repeatedly and is still used as a cover to suppress people’s movements.

It has been more than three decades since the Mendiola Massacre.

On January 22, 1987, 34 farmers marched to Mendiola protesting the lack of action on genuine land reform from former President Corazon Aquino. They were answered with bullets from state forces. 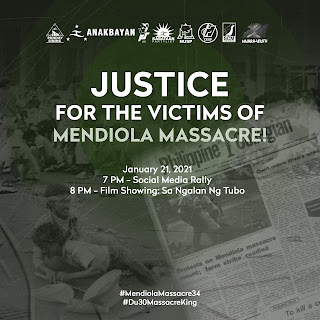 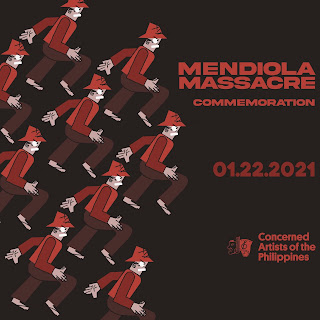 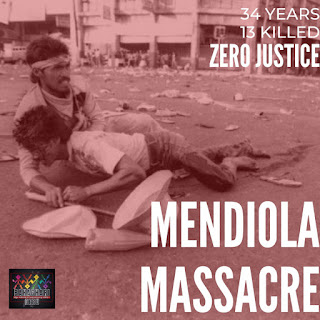 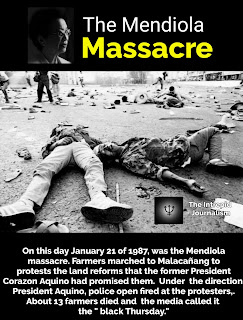 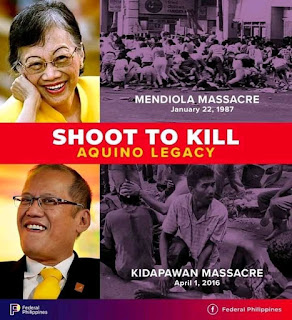 Until today, no one was held accountable. Thousands of farmers are continued to be massacred.
The Mendiola massacre happened in 1987, just a year after People Power. No, democracy was not 'restored' after Marcos. The dictatorship just wore a camouflage.
Unless we overhaul the whole system, we will just be replacing it for one faction over the other.
Rodrigo Duterte’s rabid anti-communism is not new—and it runs deep not only in our history but is tied to the parallel histories of anti-communist massacres, fascist dictatorships, and counterinsurgency campaigns backed by the United States in Korea, Indonesia, and Latin America.

This is why we cannot condemn our farmers who joined the NPA. Dahil sa kawalan ng hustisya, sila'y tumangan ng armas.

Farmers from different regions together with multi-sectoral groups march to Mendiola to commemorate the 34th year of the Mendiola Massacre and to recognize the multiple massacre of farmers from various regions that happened during the Duterte administration.

Why making the hashtag #Du30MassacreKing if he's not behind the mendiola massacre and hacienda luisita massacre? Stop making nonsense hashtags. Genocide of farmers happened during the ruling days of the Aquino clan starting from Cory to the bald Noynoy. 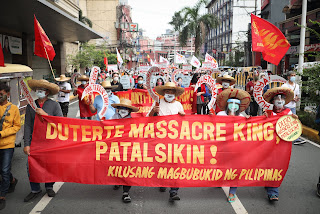 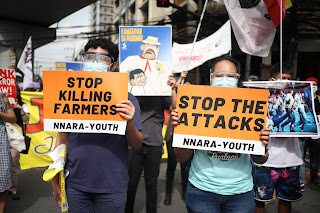 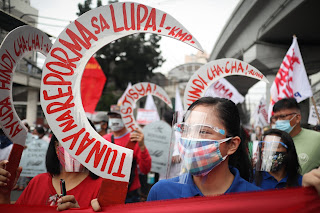 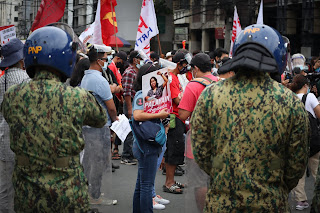 I never stated that I was in favor of the Aquinos and I have blatantly criticized the Duterte regime as I should. 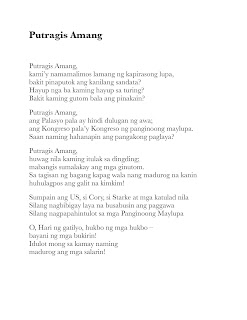 According to Mendiola Massacre survivor Ka Miriam who recalled the poem from her memory, the poem was performed by an old man during an indignation rally at Mendiola a few days after the massacre took place. The name of the author remains unknown. 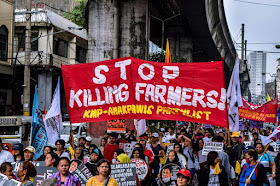 The Mendiola Massacre showed how Filipinos don't take care of our farmers. The same (if not worse) violence are still experienced by our farmers now.
1987’s Mendiola Massacre reminds us that government wields its force most brutally through the barrel of the gun.
It’s been terrorizing farmers & ordinary citizens even w/o the Terror Law, & now is more emboldened to commit vicious crimes vs the innocent to protect their power.
We stand in unity with the countless farmers who fell before and after Cory in their righteous struggle for land and decent living.
#StopKillingFarmers
#LandToTheTillers
#JunkTerrorLaw
Wazzup Pilipinas sa Friday, January 22, 2021
Share