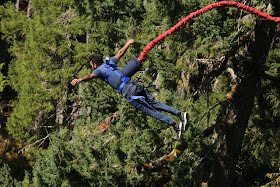 Bungee jumping is a life-altering experience, anticipated or feared. It’s also a vivid illustration of readiness potential, observed right before one jumps. We’ve learned more thanks to two guys who leaped with an electrode cap.

Have you already made up your goal list for 2020? If the highest bungee jump is on it, you probably seek new emotions and a way to release them. Another reason to think of it is visiting the most spectacular locations and feeling yourself on top of the world. Make a no deposit contribution to your emotions box that will charge you new sensations for the whole year. Anyway, every person interested either in extreme sports or neuroscience should know that this activity reveals new opportunities for our brain.


What is Bungee Jumping in the Present?

Before, bungee jumping was a way to assess a person’s bravery. It originated in the South-Pacific land called The Republic of Vanuatu today. This ritualistic jump tested other contestants. Nowadays, it’s a self-made decision most people take to prove something to themselves or get a good dose of adrenaline. If you’re searching for a definition, bungee jumping is an extreme sport common all around the world. It presupposes jumping from high-rise structures, like bridges, with an elastic cord attached to a jumper’s legs or body. Among the main technical characteristics of a flexible cord used in bungee jumping, we can name weight measurements, safety, and tensile strength. When everything is counted correctly, any danger to a jumper gets minimized.


Evaluate Your Attitude to Bungee and Other Extreme Sports

The theory is informative enough, but it’s important to answer one more question. What is bungee jumping for you? For many enthusiasts, bungee jumping is a cool way to spend time. They do it regularly and keep telling exciting stories of what it’s like.

Others get more skeptical. Such activity is associated with a feeling of fear for them. It, in turn, is followed by resistance. They keep asking why people would risk their life like this because it doesn’t make any sense.

What Emotions Lie Behind the Resistance to Start Bungee Jumping

When skeptics are told that simple dancing is proved to be a more dangerous activity, they still hesitate. Subconsciously, they understand it’s true. It reminds taking a flight. The fear of the unknown, if one had never been on a plane, or the sense that there is no way out can be a massive demotivating factor. The same thing is with bungee jumping. When you fall down from a bridge, you can neither forecast the consequences nor change the current situation. So what should one do with this fear? What if you will stand with a bungee rope around your waist and will not jump? 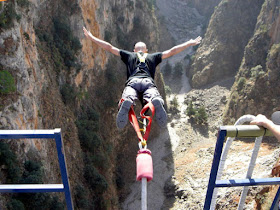 Can You Become Fobic in Different Areas because You Presumably Fear to Jump?

Today, it has stopped you from boarding a plane or taking a bungee jump. Can it stop you from going outside one day? When you stand in front of your door, all ready to go and get this instant peak of fear, can you reconsider? These worries make us evaluate our ‘readiness potential’ first described back in the mid 20th century by Luder Deecke and Hans-Helmut Kornhuber. Luckily, all this is not as bad as it sounds. Our fear doesn’t stop us at the brain level, and it has been proved scientifically.

The essence of the experiment proving it is as follows. Two young male subjects go bungee jumping for 30 times from Europa Bridge (Innsbruck, Austria). On their heads, each subject has an electrode cap recording electroencephalography signals during the whole jump. The bridge is 630-foot-high, which makes this experience seemingly more life-threatening than cliff jumping these men are professional in. The record scientists obtained is that the subject had experienced certain fear and resistance before jumping, but it had nothing to do with their readiness potential. Except for encouraging our belief in ourselves, this study will allow us to advance brain-computer interfaces that use brain electrical signals to command various devices. This will improve the lives of multiple patients whose well-being relies on such technologies.

A highland fling bungee is a dream of the adventurous. It also subjects our body and brain to extreme stress, but it doesn’t prevent us from taking this inspiring step. Today, we have evidence that our fear and stress don’t make us stop. It’s literally inside our heads, and it’s called readiness potential, which is huge and independent.

Thomas Glare
Thomas has a PhD. in neuroscience but doesn’t want to sit in a laboratory. He studies and writes about a variety of human activities and their connection to brain science. He compares uncomparable and combines uncombinable, proving that everything we do can be explained by the power of our brain.
Wazzup Pilipinas sa Friday, February 28, 2020
Share