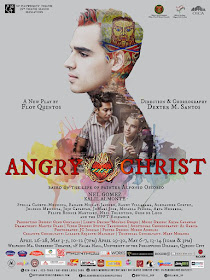 Your Pambansang Blog ng Pilipinas is a proud media partner of UP Playwrights' Theater's Angry Christ.

It's the newest play has already started its initial run and features Nelsito Gomez in the leading role as Alfonso Ossorio in a 1950s setting in Negros province. The play is about a Fil-Am artist whose contemporary work, life, love, sexual identity and other chapters of his life were brought to fore by prolific playwright Floy Quintos.

Noted actor Kalil Almonte will play Nel as Anselmo and is also debuting his acting prowess for UP Playwrights' Theater together with Nel. Dexter Martinez Santos, director of ANGRY CHRIST noted that. "The play is not to be missed because it carries valuable messages of relationships, inner conflict, love, what really is important in life."