Technology is the great equalizer, yet few realize that with every benefit that technology brings, it can also enable negativity. In the digital space, for example, it is becoming the norm to see hate speech, negative comments and alternative facts, and more so in a way that impacts reputations, privacy, relationships and in extreme cases, physical safety.

In fact, the number of cyberbullying cases are reportedly on the rise in countries like Australia, India, Malaysia, New Zealand, Singapore, Philippines, and Thailand. This is becoming a great concern here in hyper-connected and culturally-diverse Asia, where there are 629 million active users on Facebook[1] alone.

As we mark Safer Internet Day (SID) on February 7, Microsoft is challenging people around the world to embrace “digital civility” and treat each other with respect and dignity online. It may sound simple, but a new Microsoft survey shows people are concerned about the tone and consequences of online interactions and they’re worried risks will increase in the future. 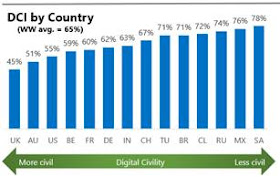 The new Microsoft Digital Civility Index (DCI), which we announced today, measures consumers’ lifetime exposure to online risks. It is based on a survey completed in June 2016 to gauge the attitudes and perceptions of teens (ages 13-17) and adults (ages 18-74) 14 countries[2] about the state of digital civility today.

The survey asked questions like, “which online risks have you and your close circle experienced, when and how often have the risks occurred, and what consequences and actions were taken?” — and it measured respondents’ lifetime exposure to 17 online risks across four areas: behavioral, reputational, sexual and personal/intrusive.

Results showed that an individual has experienced an average of 2.2 online safety risks out of the 17 included in the survey. The top 5 online risks are:

Some other key findings from the study include:

·         Two out of three respondents said they had fallen victim to at least one risk; that percentage swelled to 78 percent when participants also accounted for the online experiences of their friends and family members
·         50 percent reported being “extremely or very” worried about life online generally
·         62 percent said they did not know or were unsure where to get help when they encountered an online risk
·         Respondents ranked a “loss of trust in others, increased stress, and sleep deprivation” as the leading, real-world consequences of negative online interactions

Based on the results, DCI scores were then calculated by using the percentage of consumers who were exposed at some point in time to at least one of 17 different online risks. Lower scores equate to lower online risk exposure and a higher digital civility.

The international Digital Civility Index score stands at 65. Of the three countries surveyed in Asia, Australia ranked 2nd on the DCI, only behind the United Kingdom. 51% of Australians reported having ever been exposed to an online risk. Australia scored below international averages on nearly all category and individual risk items apart from cyberbullying at 32%, which is also the most concerning online risks in the country.

In India and China, 63% and 67% respectively reported having ever been exposed to an online risk, ranking them at 7th and 8th on the DCI. India had incidence levels that were close to the international averages across most online risks and expressed the highest level of overall concern about online risks (69%) among the countries surveyed. China exceeded the international averages on Reputational and Sexual risks and was below average on Intrusive risks. Doxing was highlighted to be a big problem in China, at 34%, which is double the second ranked country (Russia, 17%).

But even in Australia, has one of the highest levels of perceived digital civility, nearly a quarter of respondents experienced and online risk within the past one month and the figure is even higher at over 40% in both India and China (44% and 42% respectively).

Unsurprisingly, youths in all the 3 countries surveyed in the region, were found to have a greater number of interactions online than adults.

It is clear that more needs to be done to grow a culture of digital civility and treat each other with respect and dignity online, particularly among youths.


Take action and join in our Digital Civility Challenge

As a long time participant of Safer Internet Day since 2004, Microsoft is encouraging global consumers to get involved and join in the Digital Civility Challenge as they learn about online safety risk from the DCI. The challenge calls on people to commit daily to four ideals and to share their pledge on social media, using the hashtags #Challenge4Civility and #Im4DigitalCivility.


Specifically, everyone is encouraged on these four ideals:

1.Live the Golden Rule by acting with empathy, compassion and kindness in every interaction, and treating everyone they connect with online with dignity and respect.

2. Respect differences and honor diverse perspectives, and when disagreements surface to engage thoughtfully, and avoid name-calling and personal attacks.

3. Pause before replying to things people disagree with, and not posting or sending anything that could hurt someone else, damage reputations or threaten people’s safety.

4. Stand up for myself and others by supporting those who are targets of online abuse or cruelty, reporting activity that threatens anyone’s safety, and preserving evidence of inappropriate or unsafe behavior.

Along with the DCI, Microsoft is also sharing some best practices for digital civility. You can also find out more about how you can start championing digital civility on the Microsoft website and resources page.

This Safer Internet Day, as we continue to strive for progress, we must remain mindful that digital civility - grounded in empathy - is everyone’s responsibility. We hope to see digital civility become a common sense behavior, as we collectively build and support a safe and trusted online environment where everyone is empowered to share, create, learn and fully participate.