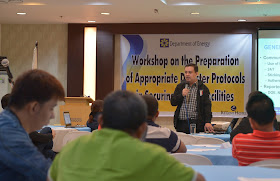 The Department of Energy (DOE) conducted today (10 February) a workshop for electric cooperatives in the Bicol Region, which tackled the government’s comprehensive disaster and management protocol and system.

Energy Secretary Alfonso G. Cusi envisioned the workshop as a policy research for the Department in updating its Disaster-Risk Response and Management Protocol, said Usec. Felix William B. Fuentebella.

“We need an effective and standardized disaster-risk response and management protocol following our observations and experience from Typhoon Nina,” said Fuentebella, relaying Cusi’s message to the workshop participants.

Cusi emphasized the need to strengthen mechanisms, especially the communication and coordination being done before, during and after disasters.

The Philippines is most vulnerable to typhoons since the country is visited by 20 tropical cyclones each year.

Fuentebella added that Cusi stressed that “safety precautions” must be undertaken during the rehabilitation of affected power facilities.

“The Secretary wanted the conduct of such workshops in response to the impacts of disasters, particularly typhoons, and to address the risks affecting the power system in the future, thus making the sector more resilient,” Fuentebella concluded.