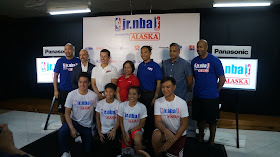 It is beyond doubt that basketball is the most popular sport in the Philippines. For reasons that you can leisurely play the game anywhere you are. May it be on a professional basketball court, or at any open area, in the garage, inside your room, even on the streets, and almost anywhere that you can hang a ring to shoot that ball.

This is one reason why a lot of people are motivated to play basketball since you can even play on your own. Of course, playing with or against others for a friendly competition, is definitely better.

The sport also keeps our youth away from bad vices and keeps them healthier with all that running, dribbling and shooting. Height is an advantage but even the vertically challenged or handicapped are also seen playing the same sport.

The NBA has made the sport even popular with games that have produced celebrity players that are admired and idolized by many people especially basketball enthusiasts and those that want to follow their footsteps.

The Jr. NBA Philippines 2017 presented by Alaska returns this year to the Philippines from January 20 - May 14, 2017 as part of the league’s effort to encourage youth basketball participation. The tip off was held on January 21 at Don Bosco Makati and was attended by the lead organizers and partners, including the coaches and alumni.

I've been publishing stories about Jr. NBA for years already and I'm really impressed with the alumni they have produced throughout the years. Indeed, the youth will be better off with a sport like basketball. Becoming a professional basketball player is not bad at all.

Below is the official press release from Alaska during the NBA Tip Off Ceremonies:

Basketball is More than Just a Game with Jr. NBA and Alaska
It’s game time as the Jr. NBA Philippines 2017 presented by Alaska returns to the Philippines. On its 10th year, the Jr. NBA tipped off on January 21, Saturday, at Don Bosco Makati.

Alaska’s partnership with NBA Philippines is in line with Alaska’s commitment to promoting sports and outdoor play in the Philippines.

Given the growing issues on health, Alaska believes that there is a need to reinforce its thrust in leading a healthy lifestyle not just by drinking milk but by living actively through sports and other outdoor activities. Alaska seeks to engage the Filipino consumers, especially the youth, through its sports development programs to help nourish children to become champions.

This year, thousands of students, parents, and coaches are expected to benefit through the Jr. NBA/Jr. WNBA activities. The program is composed of four stages: the school and open clinics, the Regional Selection Camps, a National Training Camp and the NBA experience trip.

In the end of the National Training Camp, eight Jr. NBA and 8 Jr. WNBA aspirants will be selected to comprise this year’s All Stars. They will travel with fellow Jr. NBA All-Stars from Southeast Asia for a unique, overseas NBA experience later in the year.

The Jr. NBA Program is the international youth development program of the NBA. It aims to promote basketball participation, sportsmanship, teamwork and active lifestyle among children. It emphasizes fundamental skills development and the formation of STAR values – Sportsmanship, Teamwork, Positive Attitude, and Respect.

The program is free and open to children ages 5 to 14 years old. It provides children the opportunity to showcase their talent, improve their skills and be trained under Jr. NBA coaches, and participate in friendly matches with high school varsity teams from abroad.

With the success of the Jr. NBA program in the Philippines, Alaska’s mother company FrieslandCampina, extended its partnership to cover 4 countries in Asia – Indonesia, Malaysia, Thailand and Vietnam. In 2014, Alaska launched the Jr. WNBA program to widen the reach of the sport to girls all over the country.