Hontiveros to PNP: How Can You Implement War on Drugs When You Can't Control Your Own Men? 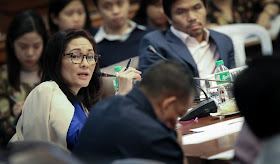 This was the statement issued today by Akbayan Senator Risa Hontiveros during today's Senate's investigation on the kidnapping and murder of a Korean national involving members of the Philippine National Police (PNP).

Hontiveros made the observation after PNP Chief Ronaldo Dela Rosa admitted that many police senior officers are afraid of their subordinates.

Hontiveros however said that this could also be an excuse to downplay the existence of a conspiracy involving high and low police officers in the kidnapping and murder of the Korean national. "Both can be true. Some PNP superior officers may have no control over their subordinates, and in this particular case, a pathetic excuse to dismiss accusations of conspiracy," the senator said.

Hontiveros said that Dela Rosa should seriously rethink the police force's war on drugs. "The PNP Chief's admission is extremely alarming but not surprising. If PNP superiors have no complete control and influence over their subordinates, it is expected that the government's war on drugs will be gravely abused by its implementors," the senator said.

"The kidnapping and murder of a Korean national under so-called Tokhang for Ransom is the terrible consequence of a human rights-deficient anti-drug campaign. The government's war on drugs opened a Pandora's box of pure evil," Hontiveros added.
Wazzup Pilipinas sa Thursday, January 26, 2017
Share