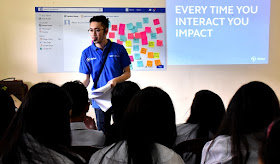 Nearly half of Philippine internet users are at risk of falling prey to cybercriminals due to online habits that make them highly-vulnerable to attacks, prompting leading telecommunications company Globe Telecom to launch the #CyberPinoy cyberwellness campaign which promotes safe and inspiring digital nation.

“Being in the forefront of digital innovations -- from providing reliable mobile and broadband connections to world-class content offerings, global partners and more, Globe continuously seeks solutions that will support its sustainability philosophy to allow it to operate in a socially responsible way. Thus, we believe that being a purveyor of digital lifestyle, it is also our responsibility to promote online health, safety, and positive digital citizenship for all,” said Yoly Crisanto, Globe Senior Vice President for Corporate Communications.

As an advocate of safe and responsible use of the Internet, Globe came up with #CyberPinoy to unify all its efforts to embrace a digital nation such as Protech101, Stop Spam, and more recently, the Digital Thumbprint Program.

ProTech101 is an online information drive that seeks to inform netizens of the dangers of online crimes by reminding them to keep their accounts and valuable information safe while Stop Spam is an initiative to address the proliferation of spam and scam messages through a Globe channel (http://www.globe.com.ph/stopspam ) where customers can reports such incidents. 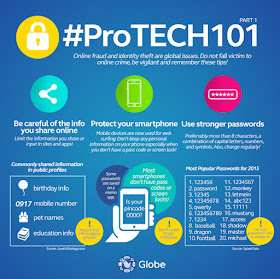 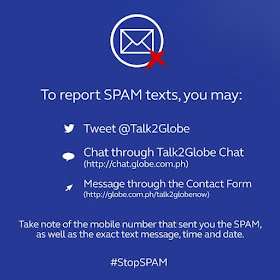 With the youth being greatly represented in the online community, Globe has also decided to adopt the Digital Thumbprint Program (DTP) of Optus and Singtel in Australia. DTP is an award-winning program that teaches high school students to understand the impact of their online behavior and how to be safe and responsible for their online activities. Through three workshops, the students learn how to discern proper online behavior, be aware of technology’s impact on their social activities, and develop skills on how to use technology to help them achieve life goals.

While the internet provides wonderful experiences, it is also home to unscrupulous persons such as scammers, fraudsters, bullies, and sexual predators who are out to harm or take advantage of other people.

Online scam topped the list of complaints received by the Philippine National Police - Anti-Cybercrime Group (PNP-ACG) from 2013 to 2015 with a total of 366 incidents, followed by online libel with 240 cases, online threats with 129, identify theft with 127 and anti-photo and video voyeurism with 89.

Likewise, the 2014-2015 Cybercrime Report of the Department of Justice’s Office of Cybercrime showed that cyberespionage attacks or intellectual property theft is on the rise with 31 percent of the 614 recorded attacks directed against small businesses while 33 percent involved internet/ATM fraud and identity theft.
Wazzup Pilipinas sa Monday, January 23, 2017
Share