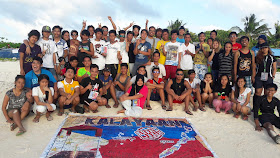 Chinese Foreign Ministry spokesman Lu Kang of China was strongly dissatisfied by what the group of young Filipinos protesters had done at the so called Zhongye Dao Island in the South China Sea and reiterated that China has indisputable sovereignty over the Spratly islands. It urged the Philippines to withdraw its personnel and facilities from the illegally-occupied Chinese island, and never do anything that may harm regional peace and stability as well as China-Philippines relations.

“About 50 protesters, most of them students, reached Pagasa island in theSpratly archipelago on Saturday in a stand against what they say is Beijing's creeping invasion of the Philippine exclusive economic zone, said Eugenio Bito-onon, the island's mayor.

The protesters, led by a former naval commander, proudly displayed their banner containing the words "Kalayaan Atin Ito" (Kalayaan - meaning 'Freedom', the name of the island chain in the Spratlys which the Philippines controls - This Is Ours). The students wanted to highlight the growing Chinese encroachment on the islands. Government and military officials had tried to prevent the group from sailing to the disputed waters, citing security and safety reasons after a storm in the South China Sea earlier.

"Our peaceful and legal patriotic voyage will never be dependent on what china will do. Our objective is to bring to the attention of the world the invasion and militarization done by China inside our EEZ and ECS at the Kalayaan Island Group Municipality. If the world will see what we are seeing, surely China will lose all legal battle at the ITLOS and will face world sanctions if it defies the result of the arbitration."

China was angered with the presence of unarmed kids in the disputed island, while they are free to have their armed vessels' presence in this island. Unjust, so to speak. Wait until the tribunal decision, then, you can say that kids presence is illegal. Try not to be over sensitive and over-reactive.

They were angry that our youth went to disputed island on a rickety boat unescorted by naval warships? Yet they continue to build and fortify artificial islands in the Spratlys. Such hypocrisy!

But is this is a very stupid move by the Philippines students? Even with the USA "standing behind," China can easily defeat the Phillippines in an armed conflict. The Fillpinos should not easily trust USA by studying what happened and is still happening in The Middle East. USA has been abandoning their "friends" once USA has gained what they are interested in.

“China claims almost all the South China Sea, believed to have huge deposits of oil and gas, through which about $5 trillion in ship-borne trade passes every year. Brunei, Malaysia, the Philippines, Taiwan and Vietnam also have claims on the strategic waters.“

Chinese dredging, land reclamation and the construction of artificial islands in the West Philippine Sea is comparable to switching off an ailing patient’s life support - swamping centuries old reefs in sediment, endangering ecosystems that play a key role in maintaining fish stocks throughout region.

They stand firm to their defiance even with the warnings of the UN & USA for China's illegal positioning and claiming 80% of the territorial waters of ASEAN Countries along South China Sea and the West Philippines Sea and the illegal grabbing of the Islands of the Philippines. Now they want to take control of the International Sea and Air lanes. 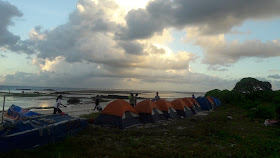 The Philippines has a case challenging Beijing before the arbitration court in The Hague. It says the “nine-dash line”, which China uses to demarcate its territorial claims, is unlawful under the UN Convention on the Law of the Sea, which both countries have signed.China has boycotted the proceedings, insisting that the panel has no authority to rule in the case.

We encourage the highest leadership of the country to inform the people correctly without sugar coating the truth about Chinese invasion of our Exclusive Economic Zone. How can the people unite and pick up the cudgels and peacefully and legally fight along side of you if you hide the truth from the people?
Wazzup Pilipinas sa Friday, January 01, 2016
Share