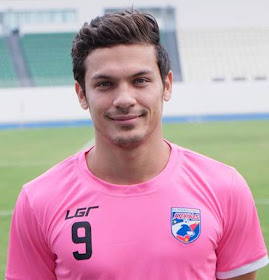 With the crucial Azkals game against a strong Uzbekistan squad less than a month away, one Azkals player who is feeling the pressure is Filipino-Iranian midfielder Misagh Bahadoran.

Although nobody is putting the pressure on him, Bahadoran feels he has to bring his game one notch higher than his outstanding performances in the last two Azkals games where he nailed the team’s first goal against Bahrain and five days later against Yemen in the ongoing 2018 World Cup qualifiers.

“The expectation (on me) is high. The pressure is there. It’s harder being in that position now,” Bahadoran said in an interview after a morning training session at the Emperador Stadium in Bonifacio Global City, Taguig City. His goal against previous Azkals tormentor Bahrain last June 11 was doubly significant for him as it was his first international goal in football.

But being no stranger to pressure in the past, Bahadoran appears ready for the demands building up around him presently. He acknowledges that the ongoing games are tougher being part of the qualifiers for the 2018 World Cup, the most widely viewed and followed sporting event in the world.

The Pampanga-born Fil-Iranian, who is also a vital cog in the United Football League team Global FC, trains everyday, making sure that he is not only sharp with his striking and dribbling but also physically fit, and shuns unnecessary distractions as much as possible, to the point that he remains girlfriend-less for the past nine months.

“I don’t go out with friends. I don’t have a night life. I just want to focus on my football,” Bahadoran said, pointing out that football is his entertainment and happiness.

The absence of distractions makes him more focused during practice and games and it is the reason why he remains “single” for nine months now.

He admitted that the hectic training schedule, commitments as a budding businessman, model and endorser and constant travel abroad for games make it hard for him to give enough time to his lovelife.

His last girlfriend was a Persian and a dentist by profession but their relationship had suffered because of his busy schedule. Without saying it, he had to give up his romantic liaison for his other love, football.

Bahadoran also does not go out with friends nor does he watch the movies as he prefers the comfort of home. At home he lies in bed for that needed rest and recovery from a weary training session day and stays on the phone “for two hours.”

If positive attitude before games is the barometer for the quality performance of a player, Bahadoran will surely score 100 percent.

He specifically shuns negative thoughts and negative people and conditions his mind to win before any game.

“I don’t want to talk about negativity, especially if there is a game. It’s important to be prepared mentally,” Bahadoran said.

That’s why it’s very important for him who his roommate will be before any game. “My roommate is important to me because he is the one I will be talking to before the game.”

“You need motivation, not someone who will talk about problems or negative things. You need to talk how to win, how to fight, this prepares me mentally and makes me strong,” he stressed.

His advice to young people getting into football? “If you have a dream, dream big and follow your dream, work hard, and don’t give up.”

He said anybody can become a football player but what sets the outstanding players apart is their hard work, discipline and the time put into practice. “Some have talents, some work harder, anybody can be a football player but it’s how hard you work towards achieving it that will set you apart. Work harder, be disciplined, train everyday, make sacrifice, and listen to your coach,” Bahadoran said.