Roberto S. Bonifacio’s “My World, My Emotions” Art Exhibit on February 13 to 19 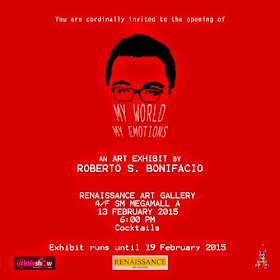 Below is an article that talks about the first solo exhibition of Roberto S. Bonifacio at the Renaissance Art Gallery located at the 4th floor of SM Megamall. Written by Cid Reyes, the article shares the many artworks created by the young artist who is only 21 years young.

This momentous event is very memorable for the young prolific artist since it's practically his formal start to make a significant presence to the art community. It is very admirable that there are quite a number of artists that continue to inspire and impress art enthusiasts through their exhibitions and art fairs. We all appreciate such creativity and would love to make their works a part of our homes, offices and communities as decorative pieces full of meaning.

We at WazzupPilipinas.com would like to thank those many people who continue to support our youth in bringing out their talent in the arts. We believe that they deserve all the much needed encouragement to continue expressing their ideas and imagination.

Please read on below and let's visit the exhibit happening on February 13 until the 19th of February. 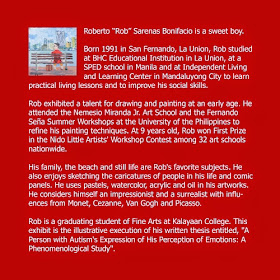 "A first solo exhibition is always a momentous occasion for an artist. That is a truism as true as the statement that “the first time is always the most memorable.” A solo show is an artist’s formal bow to the art community. An artistic debut, it is an official entry into the exciting and competitive art scene, worthy to be listed in the historical registry of contemporary Philippine art. To be sure, an artist may have participated in several group shows, but such does not have the same impact on the public consciousness as a one-man exhibition, which signals a variety of messages: the artist’s commitment to his art, his readiness and courage to face criticism, and of course, to receive a deserved applause and acclamation. For once an artist’s works are hung for public viewing, he is literally on his own.

Young and eager, driven and determined, the 21 year-old Roberto S. Bonifacio is all set and raring to launch his initial solo show. The venue could not have been more apt: the Renaissance Art Gallery. A rebirth, albeit of the aesthetic kind, is exactly what Bonifacio has experienced with his discovery of a life’s passion. Despite a diagnosis of autism, or precisely, providentially, because of it, the artist in him has victoriously emerged, even as he had immersed himself since childhood in the wondrous world of art. With the full support of his parents and siblings, Bonifacio is now ready to take center stage.

The title which Bonifacio has bestowed on his show is heartfelt and personal: “My World, My Emotions.” A prolific artist, whose enthusiasm for artmaking seems unbounded, he is displaying over fifty works that are the rich evocations of his visions and emotions. A combined spirit of playfulness and seriousness brought these works into fruition, engaging him to share with his audience the innermost recesses of his mind.

Ultimately, what is touching and felicitous about these works is the overflow of memories that impelled them to come to artistic life. They are visual reveries on canvas, and whether the subjects of the portraits are still among the living or the departed, Bonifacio has rendered to them a worthy homage. “My Beloved Mother” is a sweet valentine replete with hearts, flowers and gifts. A smiling “Portrait of my Father” conveys at once amiability and inner strength. Other portraits of grandparents, friends, teachers, and relatives brim with joy, with no diminution of affection, as Bonifacio has interiorized his feelings for his subjects. Certain to leave a smile on the audience are his portraits of two beloved religious leaders, Pope Francis and Luis Cardinal Tagle, themselves aglow with their own robust smiles. With their images captured on canvas, they seem to reside in emotional areas of the senses, other than the eyes.

Bonifacio’s still lifes are gustatory delights (cupcakes, pies, pizza and pasta, pastries, fruits and wine, tea and coffee) or common objects (stuffed toys, barbells, running shoes). The artist deploys multiple figures within the strict confines of the canvas, in works such as “Seven Guardian Fairies” perched on the branches of a tree, “Band of Brothers”, “Four Prettiest Ladies from Kalayaan”, “Anime Magical Girls”, “Four Boys Crossing the Zigzag”, which brings to mind the Beatles, barefooted, crossing Abbey Road, and “Three Nude Girls at the Waterfalls During Winter Dusk.” Bonifacio revels in repetition, in serial imagery that intensifies the human presence.

Pop Americana, surely an imprint of the artist’s many travels to the U.S., is another abiding memory, both as holiday and personal history, and shows Bonifacio’s grasp of the American social scene, as depicted in “Cowboy and nagtive American” and “Wahine at San Juan Beach.” On the other hand, Pinoy Pop (or what some derisively label as “baduy”) is markedly visible in “Videoke Queen”, displaying a heavily tattoo’d arm while lustily singing, most likely, Abba’s “Dancing Queen.” Irreverent as it may be, some quarters regard the twin images of the Jesus and Mama Mary, etched on ceramic tiles and plastered often on high-end residential gates, as Pinoy Pop. Such did not escape Bonifacio’s astute, observant eyes. A single surreal touch is gleaned in “Look Out Below! Be Safe from the Giantess”, as a roped mountaineer finds himself descending not from the boulders of the Grand Canyon, but from a humongous profiled nose.

The greater number of works, however, are famous touristic landmarks, for which it is deemed wisely to remember the remark: “A man travels the world over in search of what he needs and returns home to find it” (George A. Moore). In his own country, Bonifacio had once set forth on a journey to the Ilocos, and from that experience, produced a cache of works that depicted Vigan’s century old houses and cobble-stoned streets, the deep-purpled dragon fruit, the earthen pottery, and the Ilocano’s version of empanada. From travels abroad, he created a veritable visual diary: New York and the Statue of Liberty, Paris and the Eiffel Tower, Pisa and the Leaning Tower, Bangkok’s Buddhist temples swathed in gold, Cambodia and its ancient Angkor Wat, Moscow and its onion-domed cathedrals and Russian dolls. Corollary to the theme of travel is a fetching self-portrait of Bonifacio, viewed from the back of a bench where the artist is seated, a luggage by his feet. The title is obvious enough: “Eager to Go Home.”

Thence did Roberto S. Bonifacio pack up and go home, assured with a wealth of memories, stuffed in his heart and mind. He knew even then that he was in possession of precious images which would constitute his authentic world and his shared emotions, which he was determined to render with fidelity on the many canvases that awaited him, indeed for that fast approaching first solo exhibition. The day has finally come…