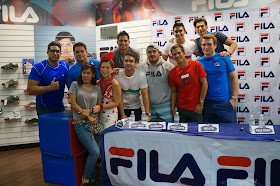 Fans were all swooning with delight and admiration during the Meet and Greet event held by Fila Philippines at 4 selected branches namely Robinson's Galleria and SM Megamall last June 21, 2014 and Glorietta and Mall of Asia last June 22, 2014.

The hunky members of the Philippine National Rugby Union Team (more popularly known as the Volcanoes), the first Southeast Asian figure skater to compete in the Winter Olympics Michael Christian Martinez, ultra-charming model, actor, host Fabio Ide and fashion designer, columnist and socialite-philanthropist known for her flamboyant outfits Tessa Prieto-Valdez was able to interact with fans of all ages at the Fila branches during these special events.

I am witness to how the girls all went gaga over the men endorsers namely the volcanic rugby hunks and especially to Olympic figure-skating fame Michael Martinez, Fabio Ide has a great number of lady fans all wanting to have a photo with him, and Tessa Prieto-Valdez was so fashionista with her outfits on both days that numerous fans also gathered around her.


The Philippine Volcanoes are such huge but gentle guys who were all endearing to talk with and definitely have a good sense of humor. I was able to chat with many of them before and during the Meet and Greet and had lots of laughs when they were kidding me about their names. Since the team is more popularly known collectively as the Volcanoes, I really do not known them on a person-to-person basis so when I was asking for their individual names and referring to the name cards on their table, one of them (Rupert Zappia) jokingly mixed them around so I would be confused of their identities. One of them (Harry Morris) even identified himself as Fabio Ide, and I believed him...hahaha.... I knew he was not the Fabio Ide that I remember but I was just so gullible to believe easily. Lol.

Anyway, thanks to Rupert Zappia, Harry Morris, Gaz Holgate, Jake Letts, Eric Tai, Paolo Jordan, David Feeney, Kit Guerra and the rest of the Volcanoes that I forgot to mention.

I felt a bit intimidated by the grace and funkiness of Miss Tessa Prieto-Valdez that I only had the guts to take a photo ops with her...hahaha... I was too shy to talk with her...Next time when we meet, I will try my best to interview her as well.

I had the opportunity to share tables with the brother, manager and friends of Michael and we had a lot to talk about especially the amazing jump in popularity of Michael. His brother was very supportive of Michael. I even found out from Michael's brother that they have a sister who studied abroad. Meanwhile, his Manager was also the managing popular actor Coco Martin.


Kudos to the Fila'Pinas campaign of Fila Philippines for allowing fans to mingle with their idols. Several celebrity and athlete brand endorsers have been chosen by Fila Philippines to carry and promote their brands. The brand has been actively promoting their brands to the benefit of Filipinos as we now see more affordable sports shoes, bags and apparels being sold nationwide at all Fila branches. I'm sure there will be more Meet and Greet opportunities soon in the near future at other branches.

I had an opportunity to sit down with Michael and his mom for a short but intimate interview after dinner time the same day of the Meet and Greet with fans at SM Megamall, and I was totally touched of their messages to each other. 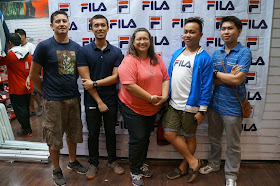 Where else can you see quality shoes as low as 1k only? Despite of their very affordable price, Fila items are tough, comfortable and well-designed. Filipinos should really be proud that there is a brand that they can count on to give them superior performance at a price that meets the budget of the average employee.

We have to thank Cherry and her team for the successful Meet and Greet events. They truly worked hard for the event, and it was very noticeable that ever since they moved in to work for Fila, so many changes and improvements have made Fila Philippines more competitive in branding, quality and recognition.

Thank you to Ms Cherry for inviting me on both Meet and Greet days. Wazzup Pilipinas looks forward in becoming your partner towards more productive years.