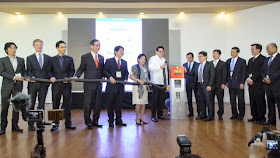 The recently-concluded 3rd Philippine Electric Vehicle Summit showed that putting the electric vehicle into the mainstream of the Philippine auto industry needs a lot of things, foremost among them the infrastructure and the technology. Add to that some incentives for those pioneering in this sunshine industry.

Rommel Juan, president of the Electric Vehicle Association of the Philippines (eVAP) says that to be able to do this, we have to plant the seeds now. “Together, let us all help in removing all road blocks and collectively help to facilitate, if not even accelerate, the growth of the Philippine EV industry”.

One of the biggest roadblocks is technology. Nilo Pena of the DOST-PCIEERD pointed out that science and technology initiatives are now sadly lacking in infrastructure such as advanced materials testing laboratories, auto parts & components testing facilities and vehicle research and testing laboratories. These they hope to be able to provide in the future.

Mr. Toru Tokushige, president of Terra Motors agrees and cites that a very important factor in EV success is the battery, specifically on the need for new technologies to reduce its cost while enhancing battery life and performance and the way it is charged.

This is the reason why Meralco has developed an EV charging station that is both a showcase and a technical pilot. “We want to prove that the charging and use of electricity for vehicles is doable and feasible. We are thus pilot testing both regular and fast-charging technologies”, says Tonichi Agoncillo, EV Project Manager of Meralco. “We are even pioneering the use of electronic digital meters that could measure up to the watt-hour level, thus electricity could then be dispensed on a ‘sachet’ basis for as low as P1.00. Corollary to this, Meralco is also advocating for the adoption of the NEMA L6-30 twist-lock connector to safeguard against accidental disconnections while charging”.

In his keynote address, Sen. Bam Aquino said that he fully supports the need to help the fledgling EV industry. He promised to file a bill granting full incentives and another one giving non-fiscal incentives for EV industry players in the Philippines. The week after, in keeping with his promise, Sen. Aquino filed Senate Bill Nos. SBN-2150 and SBN-2151 entitled Electric, Hybrid and Other Alternative Fuel Vehicles Promotion Act of 2014. “We expect that if these bills are passed into laws, there will be less air pollution, more jobs generated both in upstream and downstream industries and we will have a greener country”, he said.

Department of Energy Usec. Loreta Ayson says that the DOE fully supports the fiscal and non-fiscal incentives for the EV industry. “We want the EV industry to develop fully and fast so we are currently spearheading the ETrike Project. However, we believe it also has to be complemented by the proper infrastructure in place. The industry must be supported by a nationwide after-sales service in terms of parts and labor, 5-year warranty on parts and components and free trainings for the drivers, technicians and partner LGUs”.

“If investor incentive is needed, then we will see if this can be accommodated in the Investments Priority Program for 2014” says Gov. Lucita Reyes of the Boards of Investments. “We are now consulting the different industries as we aim for a sharper focus on preferred economic activities, on activities that will fill in the supply chain gaps. The incentives may vary per sector or per project. The validity is going to be three years. However, right now all fiscal incentives are being reviewed and rationalized to ensure only those that are relevant to the current needs will be retained”.

Auto parts making and vehicle assembly, two of the important sub-sectors of the EV industry, also want in. Ferdinand Raquelsantos, president of both the Motor Vehicle Parts Manufacturers Association of the Philippines and EV assembler Philippine Utility Vehicle Inc. outlined the different fiscal incentives the industry would like to have, such as income tax holidays plus exemption from the payment of excise tax, duties and VAT. “It would also help if the EV industry is given non-fiscal incentives such as priority in vehicle registration and franchise registration, exemption from the number-coding scheme and free parking in new establishments. He explained that in exchange for these, some of the gains would be carbon credits due to emission reduction, dollar savings from oil imports and savings from pollution-related health expenses”.

And health is indeed of primordial consideration in the EV industry. Engr. Vizminda Osorio, director of Environmental Management Bureau of the Department of Environment and Natural Resources in Metro Manila explains that 70% of air pollution comes from mobile sources such as cars and PUVs. “The negative effect is that air pollution results in 2,000 deaths of Filipinos each year and that number increases every year. Today, more than 9,000 Filipinos are affected by chronic bronchitis every year because of dirty air”.

“That is why it is very important for the NGOs, academe and private sector to formulate a comprehensive mainstream strategy to incorporate EV as part of mobility planning and the urban transport planning process” says Dr. Danielle Guillen of the Partnership for Clean Air and the Ateneo Institute of Sustainability.

All these developments, says Juan, are the reasons why he thinks the recent EV Summit was a huge success. “It was able to bring major EV industry players in the Philippines and in the region under one roof. In subsequent business-to-business meetings, they were able to share their best practices, some forged business alliances and others have crafted ways to work together for the advancement of the local EV industry. Hopefully, we can all work together to make the Philippines the EV manufacturing hub for the Asean region”.

But the best news capping the EV Summit probably came from Jay Huang of TECO Taiwan. He divulged that TECO plans to invest Php300.00 million in an EV assembly plant in Subic to serve the rolling chassis requirements for the ETrikes and EJeepneys of its local partner, PhUV Inc. and other EV assemblers. These rolling chassis or even the electric vehicles themselves can then be exported to other countries in the region.

Inspired by these successes, the Electric Vehicle Association of the Philippines also launched an ambitious project: one million electric vehicles in the Philippine roads by 2020! The object is to sell and put on the road about one million EVs by the year 2020, be they 2-wheelers, 3-wheelers or 4-wheelers.
Wazzup Pilipinas sa Tuesday, April 01, 2014
Share