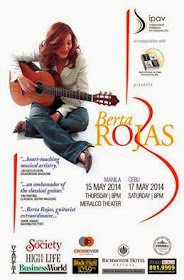 Wazzup Pilipinas!
Independent Philippine Art Ventures, Inc. in cooperation with Arts Council of Cebu Foundation, Inc. presents BERTA ROJAS on MAY 15 - 8 P.M. at the MERALCO THEATER and on MAY 17 - 8 P.M. in CEBU.

Renowned for her impeccable technique and innate musical mastery, Berta Rojas is one of the most outstanding female classical guitarists today. She has been praised as “guitarist extraordinaire” by the Washington Post and by Classical Guitar Magazine as an “ambassador of the classical guitar.”

Her acknowledged warmth and musicality have accorded her a place of preference among the audiences that have applauded her at such major stages as the Weill Recital Hall of Carnegie Hall and the Frederick P. Rose Hall of Jazz at Lincoln Center in New York, London’s South Bank Centre, Kennedy Center in Washington D.C., and the National Concert Hall in Dublin where she performed as a soloist of the Irish Radio and Television Orchestra, or Flagley Studio 4 in Brussels where she performed with the Brussels Philharmonic Orchestra for the Belgian National Television. She also had the honor of opening the Summit of the First Ladies of the Americas attended by then First Lady Hillary Rodham Clinton.

Most recently Berta has toured with Cuban saxophone player and 11-times Grammy winner Paquito D’Rivera with whom she recorded the album Día y medio -Day and a Half. This recording was nominated to the “Best Instrumental Album” category of the XIII edition of the Latin Grammys.

Berta maintains a prolific recording schedule. Her CD Intimate Barrios is one of the most celebrated recordings of the works of the great Paraguayan composer and guitarist, Agustin Barrios. It glows with the delicate insight and feminine touch this virtuoso performer brings to the music of Mangoré. With her albums, Cielo Abierto and Terruño she won great acclaim from critics, presenting a personal and renewed repertoire for the classical guitar. Furthermore, the album Alma y Corazón provided the opportunity for concert tours with Carlos Barbosa-Lima.

In addition to continually enriching her own artistic career through frequent international tours presenting concerts and giving master classes, Berta Rojas is firmly committed to furthering and disseminating the classical guitar. This has a particular focus on promoting the music of her country, Paraguay, as well as Latin American music, and includes her ongoing support to the careers of young upcoming artists.

Along those lines, in 2009, she created the first online classical guitar competition, the Barrios World Wide Web Competition. With two editions already held, it continues to generate tremendous interest throughout the guitar world. She was the artistic director of the three editions of the Ibero-American Guitar Festival held at the Smithsonian Museum in Washington D.C., and co-founded the young persons’ Beatty Music Scholarship Competition for Classical Guitar. The winners of this latter competition had the opportunity to perform at the John F. Kennedy Center in Washington, D.C.

Berta Rojas studied with Felipe Sosa, Violet de Mestral and Abel Carlevaro, among others. She earned her Bachelor of Music degree at the Escuela Universitaria de Musica in Uruguay where she was a student of Eduardo Fernandez. She later earned a Master of Music degree from the Peabody Institute under the guidance of Manuel Barrueco.

Rojas has been honored as a Fellow of the Americas by the Kennedy Center for the Performing Arts for her artistic excellence. She is also privileged to be the Ambassador of Tourism for her country, Paraguay.