Balut Eggspress : Care To Eat Balut On The Go? 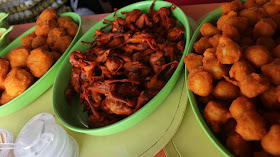 Wazzup Pilipinas !
I was born in Pasig city at my father's side of the family where my parents and I just used to rent a house near my grandparent's house. But after a few years when my parents were able to save enough money to build a house on a lot located at my mother's side of the family, we finally transferred our new home we can now call our own. I am no longer living in Pateros and went back to the city where I was born. But the stories I could tell about the town are so rich and plenty.

I grew up in the small town of Pateros and spent my remaining childhood days in the town where "alpombras" and "inutak" became popular. But the most popular product in Pateros known to many was the "balut" - that boiled duck egg with a fetus inside, and the many other variations in cooking the duck eggs.

I was never really a lover of that so-called aphrodisiac delicacy called "balut", but I loved the "Penoy" and "Itlog na Maalat". The "Bibingkang Abnoy" was smelly because it was made from almost rotten duck eggs, but there were still many who enjoyed eating it. 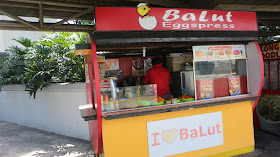 I was requested to meet with a group over at Robinson's Place in Pioneer Mandaluyong but got there a bit too early so I had to wait a little while. We were supposed to go to an event sponsored by a condominium developer.

While waiting outside, I happen to glance over the area where there were some food stalls. One of them was Balut Eggspress. 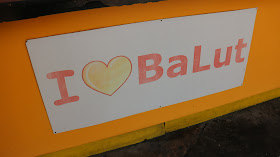 Since I was somewhat "connected" to anything "balut" (I've even tried to put up a blog site dedicated to balut but it got banned when I started posting collected information and articles that were copied from different websites. I wanted to put up a site where everything about balut could be found, but did not consider the copyright infringement law.

But it never really went that far. I guess some pissed site owner just reported me to Google or Blogger, and had my free blog site closed down. I couldn't access it anymore, and there was no warning it will be closed down, so I never really had a chance to back it up. 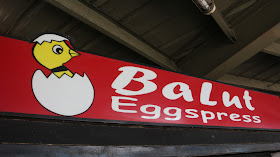 From the information I got online, Balut Eggspress serves penoy, batter-coated eggs (kwek-kwek), quail eggs (tokneneng), and the best-selling fried day-old chicks and steamed balut. Its franchiser, Jeanne E. Banez, opened her first stall at the Farmers Market in Cubao, Quezon City, in October 2003, but now she has four company-owned outlets and 14 franchised stalls in Metro Manila.

It was said that Banez started franchising Balut Eggspress late last 2006, offering it for P290,000 plus a fixed monthly royalty fee of P3,000 for product research and development. The franchise is good for three years and eight months and the fee covers the food cart and initial inventory.

Franchisees must be ready to rent space at P15,000 to P18,000 a month and to pay three months’ rent in advance, and to put up two months’ security deposit and a construction bond.

To get the ball rolling, applicants must submit a letter of intent, their bio-data, NBI clearance, proof of billing address, and work and financial details.

“If all is well, we can come to a franchise agreement in as short as one week,” says Banez. “We deliver 350 balut, 90 penoy and 20,000 pieces of quail eggs a day. If an outlet exceeds these, we usually do another delivery within the day.”

I tried buying a few from the food stall to satisfy my curiosity. I bought one of each type of product they had on display. I never really ate them on the spot because I was sure that there will be food served at where we were going that day.

I was glad I brought along with me my trusted backpack where I temporarily stored it. I just took them with me at the event, and planned to eat them when I get home. 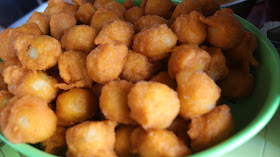 The golden colors of the duck eggs were appetizing for me. But still, the thought of eating the small duck fetus was a bit hard for me.Balut Eggspress also offered fried quail eggs as part of their delicacies.They were similarly cooked just like the duck eggs.

But come to think of it, we eat chicken and ducks anyway, so what makes a smaller version any different? 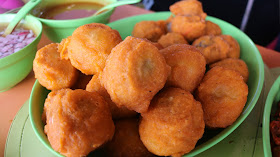 I kind of enjoyed munching on the somewhat orange-colored eggs (both quail and duck). Very tasty and satisfying, and also great with rice. 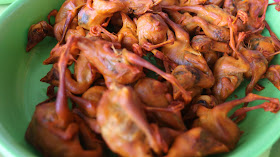 Those nasty little fried ducklings (or day old chicks) could be delicious looking for some, but still gruesome for many like me. But try closing your eyes, and then taste it. You'll be surprised on how delightful its taste that you'll be asking for more.

They're just like the small birds that my father used to bring home after a bird hunt. My father's weekly hobby back then was to go with his "barkada" in different locations as far as Zambales, and hunt for birds using air rifles. I still remember those days when the freezer portion of our fridge was full of birds that were already cleaned of their feathers.

Ready for cooking anytime one pleases. But since they were just too many, we were really not able to finish them all until new batches arrived. 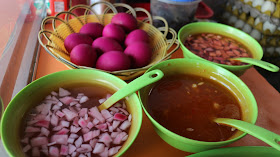 The "itlog na maalat" or salted eggs were similar to the ones I tasted everywhere I go. The only difference is the amount of saltiness. I guess its only in the measurement of teh amount of salt used in the process that differentiate one from the other. They have not yet reinvented the wheel on this particular process of salted duck egg making. 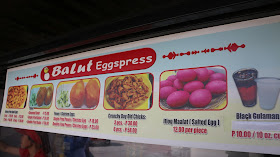 Prices were considerably affordable and just right for those on a budget. I have not seen any official website or Facebook page, but there are a few articles online that talks about them. I'm not really sure if the owner is a resident of Pateros, but it sure would be great news if he was since not many have yet capitalized on a big venture for the balut industry. I have not heard of any news that has balut in their project or program.

Pateros is a very small town that is located in the middle of cities like Pasig, Makati and Tagig. Regardless if there are news that it will be slowly merged or taken over by one of the cities nearby, it still deserves some recognition on its own.

The balut is one of the most recognized product that is synonymous to Pateros, and I am sure hoping one day that many businessmen and investors would venture into making the balut business a profitable venture.
Wazzup Pilipinas sa Thursday, March 28, 2013
Share